Who needs cable when you got the ghetto? 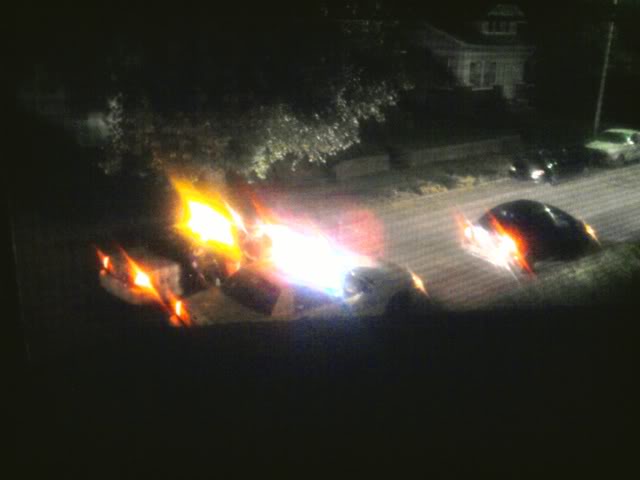 Okay, we don't really live in the ghetto, per se, but it's about as close as one gets in this part of the state. Having said that, one of the few perks is the sheer entertainment value our less-than-educated denizens provide. Living on the corner next to a major thoroughfare means we're privy to a high degree of police activity. The accompanying picture is the best of series of photos I took of a car pulled over Friday night, it's occupants patted down, but eventually sent on their way.

Of particular interest as we shamelessly watched the proceedings from a second story window was the second patrol car that showed up, in which a woman got out of the back and spoke with the officers for a few minutes. We thought maybe some heavy shit was about to go down, but alas not. The woman and officers got back in the car, which proceeded to leave in a hurry with lights flashing and siren wailing. I suspect these officers were involved with this.

As disappointing as it was that nothing really happened, we've seen our fair share, which is why something like this grabs our attention. The lights and TV go off, and the window goes up. Front row seat.

Best ever was a drug bust right in front, involving five police cars, two cars of teenagers, including a teen-aged cocaine dealer, several open containers of cheap booze, some pills and other assorted paraphernalia, and an angry mother who was probably prepared to mete out more punishment than our justice system. Talk about your entertainment value.