I hate rats, yes I do

As a homeowner, is there anything worse than having mice? Well, yes: rats. Our house is over a hundred years old. With that comes the resignation of knowing some things are inevitable. Some dampness in the basement when it rains. Cracked paint from settling walls. And vermin.

Look, I don't like vermin. (Hey, who does?) They creep me out. Bugs I can generally handle (except big hairy spiders that disappear before you get 'em). But give it fur or scales and I'm outta here. (Okay, nothing with scales yet, thank God.)

Earlier this summer, our babysitter was taking something to the basement and saw a rat scurry when she turned on the light. Crap. I've dealt with mice before, but rats are a whole 'nother ball game.

Tails. It's the tails. Have you ever seen a rats tail? It's long and scaly (whoa!) and just plain creeps me out like no other thing short of a snake can. Plus the teeth. And those evil beady little eyes. And whatever germ du jour it happens to be carrying. Yikes.

So I trudged out to the local home-improvement store to pick up a rat trap. Having success with clamp-type mouse traps, I bought a rat-sized one that's about the size of a Buick (having opted not to get poison because I don't want some dead thing decomposing God knows where). A little peanut butter and down in the basement it went. Wait.

This went on for several months until last week when the missus went down to get the Christmas decorations. I can only imagine the surprise — nay, the horror — upon finding the trap sprung with the motherfucking dead rat in it. Then, to her credit and my amazement, she moved it. Crap, yeah. She moved the rat, trap and all, to a trash can to await my arrival for cleanup. Can't blame her there. Luckily the trash can had a bag or it would be toast, too.

(And just for gratuity's sake, here's another picture.) 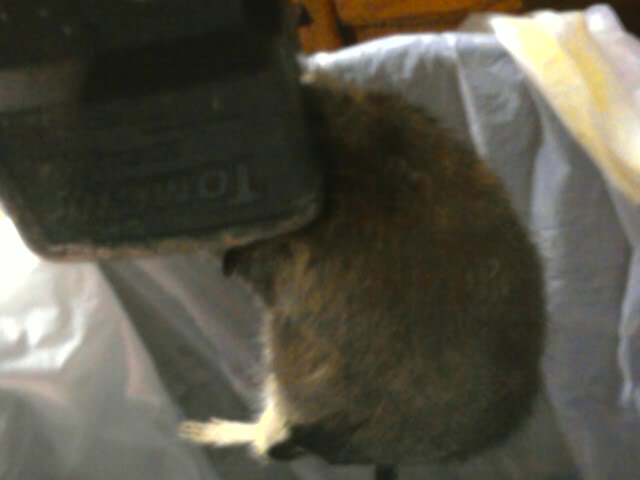