Sometime last year, my brother and I and a friend of ours started talking about going on a fishing trip. Over the months, we talked about renting a floating cabin and making a weekend of it. Alas, life and Covid happened, and it became a day trip on a rented pontoon boat. Friend was out, but family came in, and we had a great time. This was in early August.

Leading up to this trip, I fancied myself something of a fisherman. I bought some stuff. A lot of stuff. Fishing pole. Hooks, weights and swivels. Myriad artificial lures. A canvas tackle bag. I wanted to fish, dammit, even if just for, like, thirty minutes. And I did get to fish a bit, though unsuccessfully. But it was enough to, well, not scratch the itch, but make it itch even more. I decided a trip back to the lake was in order, so I rented a jon boat for October 1. My brother declined to join me.

In the run-up to my trip, I got pretty excited. I bought a second pole. More lures. An actual tacklebox with seven shelves and all the compartments and whatnot. I spent hours arranging and organizing my fishing gear. I was stoked.

I took the day off from work and woke up, prepared and left well before my alarm would have gone off for a typical day. I got to the lake and checked in: this boat was all mine. Well, until the attendant decided there was just a bit too much water at the transom, and they transferred me to another boat. I didn't take a picture because, as they say, if you've seen one, you've seen them all.

There's a reason my brother didn't want to go. Our cousin told us these boats are wobbly, and he had no desire to end up in the water. Sure enough, it was, shall we say, unsteady. I took a few tumbles loading my gear, not gonna lie. However, the attendant told me that you could stand on the edge, and the boat wouldn't capsize. You'll probably fall in, but it won't capsize. That was a little reassuring. He told me I didn't have to wear the life jacket, but they're required to give me one. Hmm. Also, don't lose the anchor, or it's a $70 replacement charge. 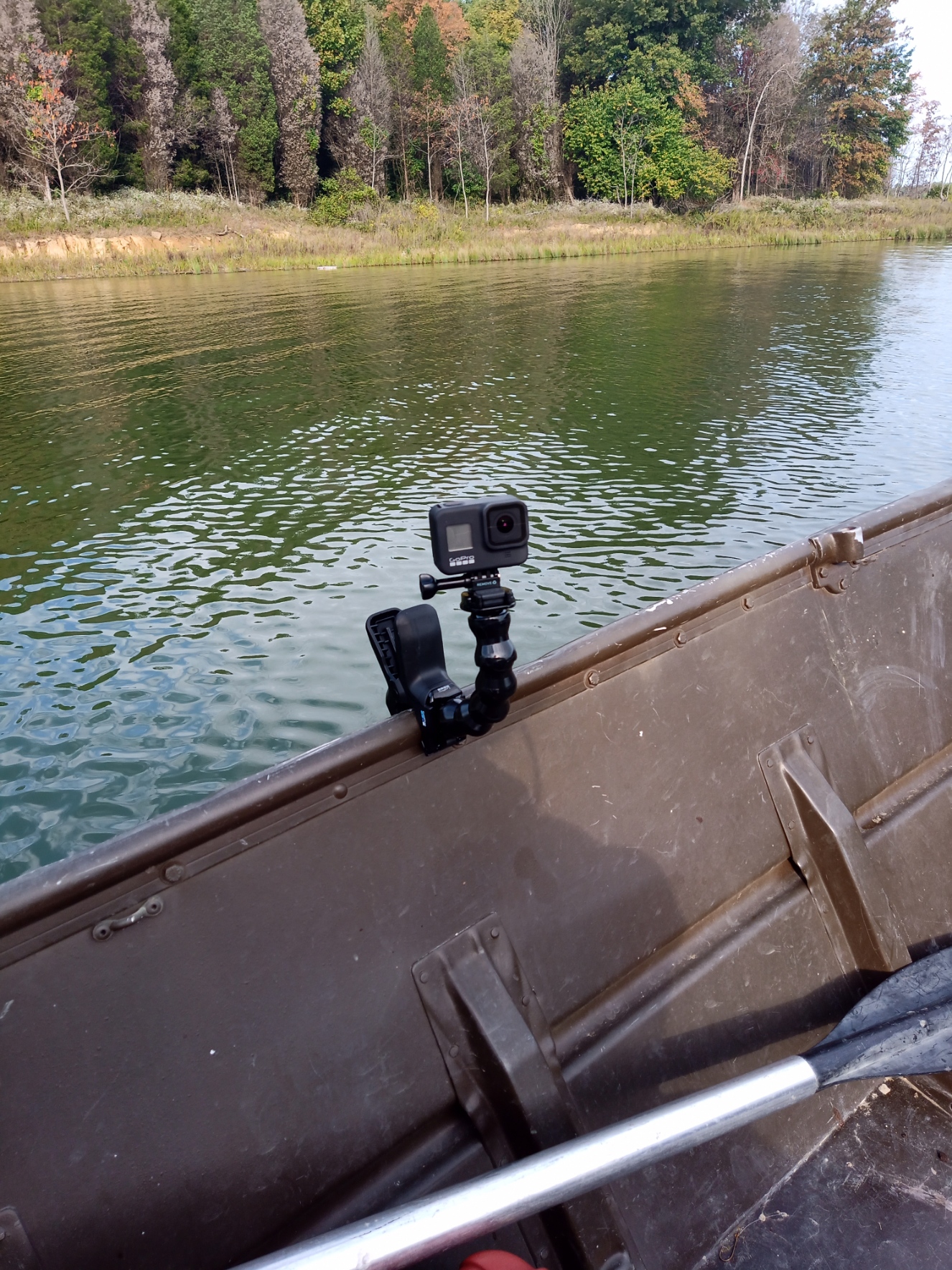 I'm going to pause to mention, the week before the trip, I decided I needed a camera. Something I could mount so I could photograph all the fish I was going to catch. Something like a GoPro. So I did. I bought a GoPro. And the clamp mount. And an extra battery. And a carrying case. And a charger with another extra battery. Oh man, it cost a pretty penny, but I was set. I even got it set up perfectly and everything, as you can tell by this photograph of my photographing device.

Now it was time to do it. Time to fish. I drove the boat to a cove off the main lake — looks like a nice spot. Poles were ready to go. Cast. Reel. Cast. Nibble. Reel. Nothing. Repeat. This is pleasant.

And then I saw it. Something brown and moving through the water about thirty yards away. A snake? A turtle? And though it was moving, whatever it was didn't change shape or seem to undulate. So that ruled out a snake, to my thinking, but I couldn't quite make it out. I stood there on the boat, dumbfounded, watching this... this thing cross the cove. So dumbfounded, in fact, that it didn't occur to me to take a photo or video (though at that distance I doubt it would've been very interesting). So I watched. And with eager anticipation I watched it get to shore. And it was... a squirrel. 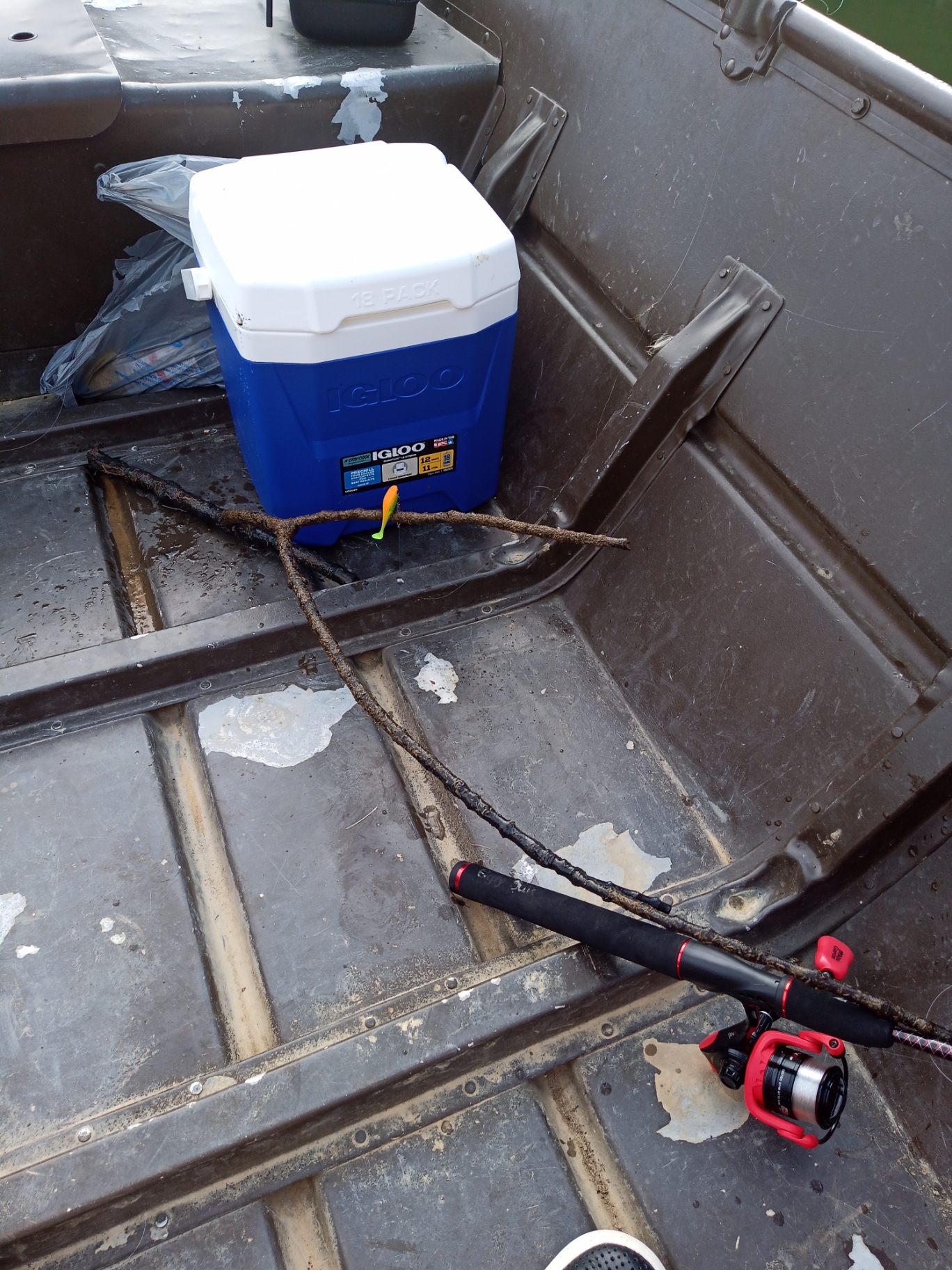 Back to fishing. And it didn't take long to get a bite. A looooooooong steady bite. Yep, I was snagged alright. Great. On the plus side, I was able to pull it in, so I didn't have to cut the line. On the not plus side, it wasn't a fish, dammit. On another note, I'm not a learned scientist or anything, but generally in my world view, wood floats. But I threw this back in and it immediately commenced to sink. Go figure.

Sadly, this was probably the highlight of my day, fishin-wise. It wasn't long after this, after having moved the boat to another cove, and then letting it drift to where I was at shore, that I was moving about the boat (as one does) and I proceeded to trip. Not just a stumble, but a full on trip. Down I went toward the side. "You'll probably fall in, but the boat won't capsize" flashed through my mind. I'm going in, I thought, and without my life vest. In two feet of water. But, fortunately, I didn't fall in. What I did do, however, was kick over my tacklebox. The seven-shelf multi-compartmented fully-organized tacklebox.

Have you ever seen this meme? That was how I felt. Just plain flat-out resignation. Because that tacklebox wasn't closed, let alone latched. And in that split second, there were hooks and lures and weight and swivels and bobbers and pliers and everything else strewn about the floor of the boat. A floor that, while not wet per se, was muddy. In the grooves. Where all the little pieces were now lying.

I sat there quite some time contemplating my fate. Contemplating the chore ahead of me cleaning this up. I felt like crying.

After a time, I decided to move the boat. Just to move. I figured I'd find a new spot, clean up the mess, and get back to fishing. A new start, if you will. So I found another cove, quite nice, and dropped anchor for the first time so I could drift in a circle and not have to fire up the outboard to move the boat away from shore. And then I sat. And sat. Had a soda. Sat some more. It really took some time to build the motivation to get on my hands and knees in a boat to pick up hundreds of tiny metal objects. Organization went out the window, the goal was to just get it picked up. And eventually I did. Then I had a thought...

Was the anchor tied to the boat? There was no rope at the bow, so I assumed not. Welp, there's seventy bucks in the water. I sat down again to assess the situation. Contemplating some more. Fortunately, I realized, the anchor was indeed tied to the boat. Whew. Still... am I done? Did I spend all this time, effort and money for three hours of unproductive fishing? I decided to take the boat back in. I had it all day, so I figured I'd take it back to the dock and reassess from there. So I weighed anchor and headed in. One of my small victories that day was manuvering the boat back into its slip without hitting any other boats (there were three other boats in the slip, as you can see above).

The attendant told me as long as I stayed in the boat, I could fish the dock area (fishing from the dock is prohibited). That was tempting, but I decided I'd had enough.

Now, as much fun as we all had on the pontoon in August, I don't think it'd be an exaggeration to say one of the highlights was the dinner afterwards. We went to a barbecue joint just outside the state park called Benny's. My brother and I both had the pizza, and it was excellent. So I thought what better way to cap the day than some pizza and a nice cold drink. Though their patio was busy, I chose to eat inside in the air conditioning, but the meal was excellent. My brother was jealous he missed the pizza.

So did I have a good time? All-in-all, not really. Was it worth the effort and expense? Again, not really. Do I regret going? Absolutely not. Because it taught me a valuable lesson: stick to the pontoons.