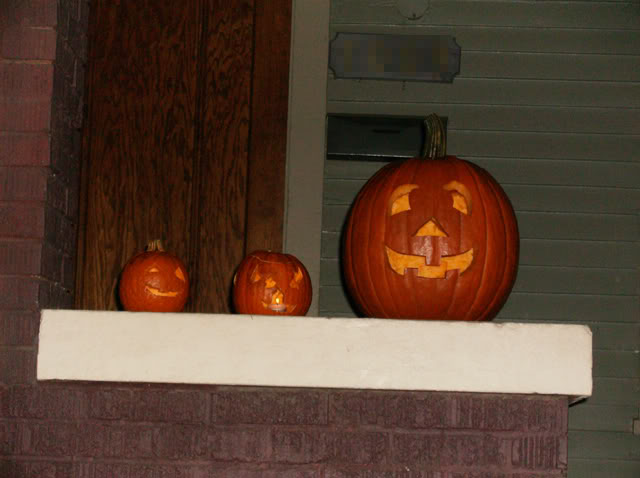 I would've posted a photo sooner of this year's pumpkin, but we didn't get around to carving until last night. I know, that's like not trimming the tree until Christmas Eve, but hey, according to movies of the Victorian era, that's when they did it anyway. And it's not so much a waste if the display sticks around several weeks past its freshness date.

(Hmm. Interesting that all our major holiday decorations — pumpkins, trees, eggs — all wither and rot.) 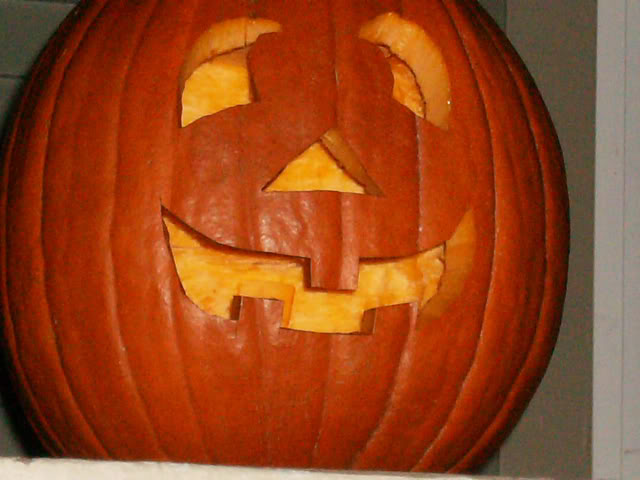 Personally, I think it turned out well. Having done it at the last minute, I had the fortunate opportunity to look at everyone else's jack-o-lanterns while we took the kids trick-or-treating. I knew what I didn't want to do, and that was screw it up. Having done the scary visage last year, I opted for friendly this year. Mission accomplished. 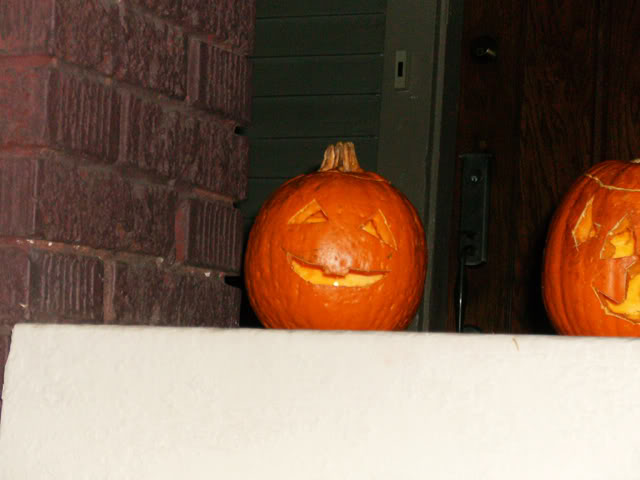 Additionally, this year a church gave each of the kids a "mini-pumpkin," so last night was a three-fer. And, of course, the smaller the pumpkin, the more difficult the scooping and carving. Having opted to take my advice, the eldest let me carve his for him. For its size, this one also turned out well, if I may say so. And dammit, it's so gosh-darn cute.

The younger, in contrast, was more interested in doing it himself. We watched in horror/fascination as he repeatedly stabbed the knife precariously close to his fingers. I was prepared for a trip to the emergency room, but lucky for him he emerged unscathed. I wish I could say the same for the pumpkin. Poor guy.

So as I write this this morning the jack-o-lanterns are still intact on our front porch, which is a minor miracle in our neighborhood. All in all, Halloween could have been much worse, but personally I'm glad it's over. Now I get to look forward to Thanksgiving (yum!) and Christmas (more yums!), even if it means dreading the tree. Hmm, maybe I'll wait till Christmas Eve.