Elves on strike strike out

I'm sure somebody somewhere thought this was a good idea, but like so many things, it was an idea that should have been quickly forgotten.  I'm talking, of course, about Elf Bowling: The Movie, a computer-generated holiday film from the makers of, well, Elf Bowling: The Movie.  It involves the "real story of Santa" and his brother Dingle (yep, Dingle Kringle), pirates (yes, pirates) who bumble their way to the north pole, and hilarity ensues.  See, eventually, the elves go on strike, Dingle takes charge, and it's up to Santa to, yep, you guessed it, save Christmas.   Read More →
Posted December 10, 2007 at 1:12 AM by Michael 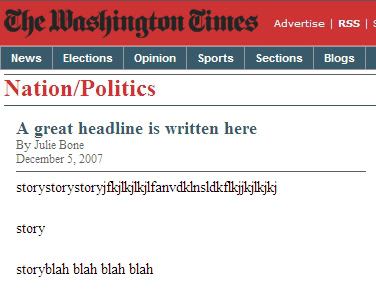 Just when I was lamenting the lack of content in Metamorpheus, I run across this today courtesy the Washington Times. Somebody fell asleep at the wheel on this one.   Read More →
Posted December 6, 2007 at 12:12 AM by Michael

Don't mind this post, its just a sad commentary on my inability to maintain Metamorpheus in anything even remotely resembling a timely manner.   Read More →
Posted December 5, 2007 at 12:12 AM by Michael

A meal to remember

First, I hope everyone had a great Thanksgiving.  I've been eating turkey regularly for the past week, but I finally had to throw the rest out because it was dried out.  At least I got one final turkey salad sandwich out of it.  Yum.   Read More →
Posted November 28, 2007 at 11:11 PM by Michael

I thought clowns were supposed to be funny

I can't say I've ever been a big fan of the martial arts genre, particularly the Hong Kong films. Much like Godzilla, they have production values and an attitude all their own that can be a little off-putting to those not in on the joke. I've seen some Hong Kong films — yes, even Crouching Tiger, Hidden Dragon — so I don't want anyone to think I'm dismissing them out of hand. Not at all.   Read More →
Posted August 18, 2007 at 10:08 PM by Michael